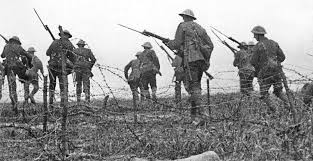 Today we commemorate the beginning of the Battle of the Somme.  Seared into the public memory of our country, the opening day of the battle saw the greatest casualty list in British military history.  The battle has High Green links for two local men died in that terrible clash of armies.  They were:

Colin Platts – whose name is on the memorial at Thiepval

Reginald Smith – who died of his wounds on the 11th October.

We remember them today in order to learn from history and to never let such a war happen again.